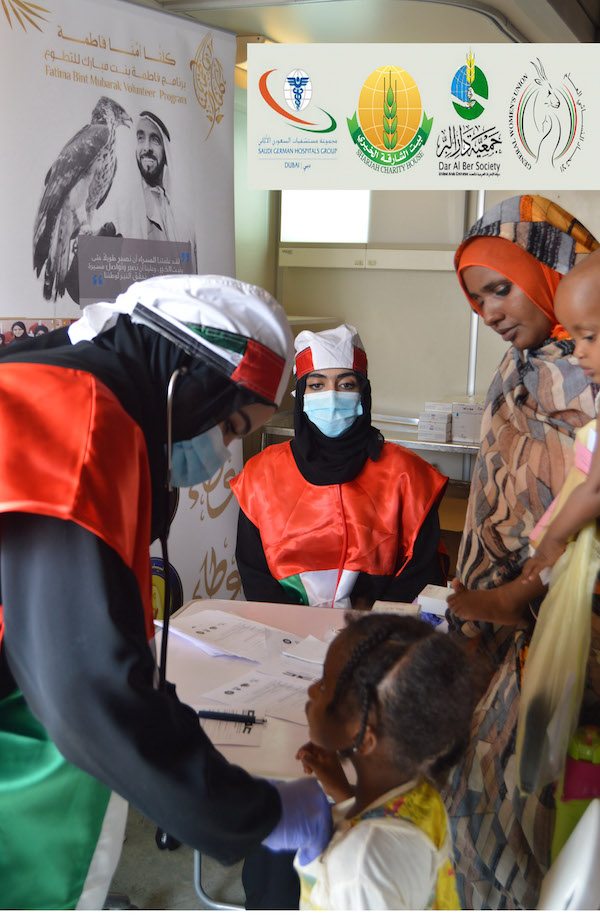 KHARTOUM, The Sheikha Fatima Global Humanitarian Campaign has launched the initial pilot operation of its mobile clinics and field hospital for women and children in Sudan, in a first of its kind initiative to provide the best diagnostic, therapeutic, and preventive services to patients in Sudanese villages, under the supervision of leading UAE and Sudanese volunteer doctors from the Fatima bint Mubarak Volunteering Programme, and under the theme, “All of us are our Mother Fatima.”

The launch of the campaign is part of a joint humanitarian initiative between the Zayed Giving Initiative, the General Women’s Union, GWU, and the Sanad Charity Foundation, which is an exceptional model of humanitarian partnership and in line with the directives of President His Highness Sheikh Khalifa bin Zayed Al Nahyan declaring 2018 as the Year of Zayed the Giving, to strengthen the UAE’s role and humanitarian message and ease the suffering of patients.

The campaign’s mobile clinics and field hospital aims to treat women and children in various countries, in co-ordination with government, private and non-profit institutions and in line with the country’s journey of giving and volunteer humanitarian work, whose foundations were established by its founder, the late Sheikh Zayed bin Sultan Al Nahyan, and the desire of its wise leadership to establish the culture of volunteer work and humanitarian giving.

The pilot operation of the mobile clinics and field hospital is a continuation of the programme’s humanitarian initiatives, in partnership with the Dar Al Ber Society, the Sharjah Charity House and the Saudi-German Hospitals Group, which have provided realistic solutions to health issues in many countries.

The current operation of the mobile clinics and field hospital in Sudan, in coordination with local official and in partnership with humanitarian institutions, is part of an operational plan that is being executed under a timeframe and the supervision of volunteer doctors from the two countries.

Noura Al Suwaidi, Director-General of the GWU, stated that the campaign’s message has managed to reach thousands of women and children through its humanitarian services, and has succeeded in attracting the best medical staff and enabled them to provide the best diagnostic, therapeutic and preventive services, which has contributed to easing the suffering of needy patients and promoting social awareness about major diseases and the best methods of treatment and prevention.

She added that the campaign’s humanitarian mission to treat women and children in Sudanese villages aims to offer the best services and ease their suffering, under a voluntary and humanitarian framework.

Al Suwaidi pointed out that the campaign is part of a series of initiatives that aim to prepare leading women to conduct volunteer and humanitarian work in government and private institutions, which will help to develop their skills and abilities while enabling them to lead volunteer and humanitarian work in mobile clinics and hospitals and achieve sustainable health development.

She added that the first pilot operation of the mobile clinics and field hospital was launched in co-ordination with the Sudanese Ministry of Health, after completing the administrative procedures and meeting the technical requirements to receive patients according to the plan of the programme’s work team to provide the best free medical services, under the supervision of volunteer doctors from various medical specialisations. The official launch will take place during the coming weeks, she further added.

She added that Sheikha Fatima has given humanitarian work her attention and care, to provide the best services to various segments of the community, especially women and children, by attracting, training and empowering women in volunteer work and humanitarian giving.

She also praised the campaign’s innovative role, which has advanced women’s empowerment in the area of humanitarian giving in the Arab world, as an innovative model that is the first of its kind in the region.

Osman pointed out that hundreds of Sudanese volunteers have participated in the programme in Sudan, which has enhanced their skills and abilities to handle humanitarian tasks that are essential to joint volunteer projects, to serve women and children in various Sudanese villages.

Dr. Adel Al Shameri, CEO of the Zayed Giving Initiative and President of UAE Doctors, stressed that the mobile clinics and field hospital will work under an operational plan to cover all Sudanese villages while pointing out that the volunteer doctors will be trained at the Zayed Humanitarian Work Academy to develop their abilities in field medical work, and will be awarded certificates after passing the training programme, and will then work in the field in the mobile clinics and field hospital in Sudan.